Life Under the Big Top 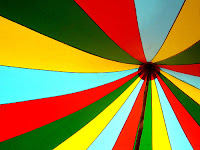 In my daily peruse of Real Clear Politics, I came upon this:

"Only Hillary Can Reunite the Republican Party"

The focus of this article was the current division in the GOP, but the biting last three sentences read:

"Both Sen. McCain and Gov. Romney are too flawed to reunite and reinvigorate a dispirited Republican party. There is only one candidate who can do that. And she might lose to Barack Obama."

This is life under the big top. As a Democrat, my party never seems to experience this, but it is evidence of the "big tent" theory which leads to GOP organization and GOP wins.

The GOP has become masterful at getting its members to "take one for the team." So on the issues, a member of the GOP may say to themselves, "Well, I only agree on 4 of 6 issues with a particular candidate, but I will go with the flow."

Democrats do not like the "flow." It is the issues that too often divide us because we cannot see the value in a common cause.

Like this election, for example. If we just want a "D" win as a party, then we ought to act like it, and put up a candidate who will not cause mass mobilization by the other party. So, thinking strategically, who has the best chances of beating the GOP #1 OR, alternatively, who will not cause a rally cry to be raised throughout the GOP to defeat our candidate.

I am afraid of the angry mob, especially after the last eight years. It might be time for the Democrats to spend some time under the big top, at least until November 5, 2008.
Posted by Gagnier at 4:50 PM No comments: 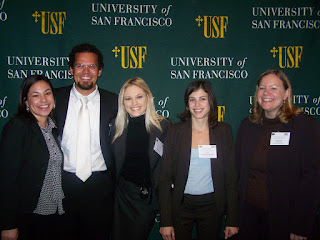 Yesterday, a handful of students, including myself, hosted the inaugural Symposium for the USF School of Law's Intellectual Property Law Bulletin, The Toll Roads? The Legal and Political Debate over Net Neutrality.

It was not until the end of the day that someone stopped me for a substantive question (not a "Where is the bathroom?" or "I need....") about the issue that was the topic of discussion.

I was finally asked what side of this important debate I was on.

I will be honest: I lean to the CopyLeft. And when I think about why I do, I remember that my main concern, starting with Eldred v. Ashcroft, is the fact that "information" is getting locked up for longer than need be (or profit motive really even warrants. I still urge the Supremes and Congress to really peruse the Economists' Brief submitted in that case.)

So, where does this leave me in the prospective world of information access online, specifically the free flow of all information.

I do not know.

What I do know is that I had hoped that by bringing together a group of brilliant minds, with such diverse backgrounds, that the 19 of them, 20 including CPUC Commissioner Rachelle Chong, could provide a communicative framework that would round out the issue for the average law student.

My colleagues at school were still left lost in the midst of technical jargon, the work of econometrics and equations, and rhetoric.

No. Not in the sense that I know where I need to intercede myself in this debate.

It needs a communicator. The lack of traction in Congress, the lack of public adhesion, and the lack of common knowledge will continue to hurt this and other uber-technical issues.

Some say its premise is simple....but I still do not see the "stickiness." (Thanks, Gladwell.)

Well, let's cross our fingers and hope the good people at USC pay for me to figure this out over the next three years.

But I truly thank my fellow students who helped me yesterday. Out of the many people I go to school with, they allow me to leave SF knowing 4 other capable, intelligent, and passionate people who care about this and other IP issues.
Posted by Gagnier at 9:08 PM No comments: