I am blogging from the FCC hearing being held at Stanford today concerning Net Neutrality. Despite the warnings to get here early, I am sad more people are not here with t-minus six minutes til the hearing starts.

The hearing is broken up into two panels: one focused on Network Management and Consumer Expectations and another one focused on Consumer Access to Emerging Internet Technologies and Applications.

Many of the panelists from the Net Neutrality Symposium my law school bulletin, the Intellectual Property Law Bulletin, hosted in January including George Ou, Markham Erickson, and George Ford. 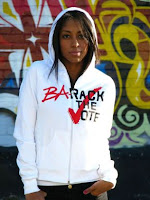 Let me first comment that I will be ordering this hoodie.

The reason I comment on this is because this "hoodie" presents a unique situation: A for-profit company taking the logo/trademark of a national non-profit corporation and using it for profit by selling apparel.

I am on IP overload.

The first thing that may jump to mind is consumer confusion. If this case, people may think that Rock the Vote, the non-profit whose trademark has been slightly modified in an effort to sell apparel supporting Barack Obama, has endorsed Barack Obama.

Although the company using the logo is not in direct competition with the organization, it may confuse parties regarding the work of Rock the Vote, which is primarily a youth voter engagement organization that works with all youth despite party affiliation (yes, the organization does have a progressive tinge.)

So what happens in this instance? If Rock the Vote were to care, could they successfully pursue a trademark claim against Barackawear.com?

When it is two companies, it would seem a little more clear cut. And normally, it is a non-profit trading on the mark of a for-profit, merely to gain recognition of a campaign for social good (Think of Greenpeace's Kleenex ad on YouTube).

Food for IP geek thought.
Posted by Gagnier at 3:15 PM No comments: